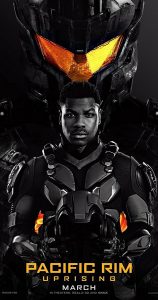 Pacific Rim Uprising Soundtrack: It is a scientific fictional film that describes the story of an ex-jaeger pilot and his sister who lead the upcoming generations to safeguard the Jaeger program and fight against the intruding monsters. Their goal is to defend the global defense program that will otherwise lead to the extinction of humanity.

The soundtrack from Pacific Rim Uprising, a 2017 Movie, tracklist, listen to some of the 1 soundtrack songs and play OST music. View who sings all the songs