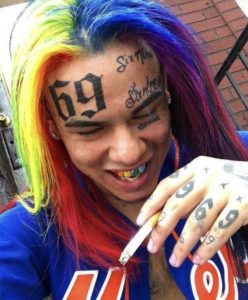 6ix9ine’s been making a lot of noise lately He’s the talk of the town and this past week, he was making headlines for the video shoot for “BILLY.” He sent an open invite for the shoot which ultimately resulted with police attempt to close it down. Now, he officially releases the visuals for the song. The last 3 videos 6ix9ine put out helped him gain numbers on the Billboard charts.

It’s always 6ix9ine this and 6ix9ine that
Niggas on my dick and on my yack
These niggas lookin’ for me, you could hit my jack
I done dropped my address, y’all know where 6ix9ine at
I don’t flock, yeah, nine to his back like Ibaka
Baka, not nice, with the fuckin’ top up
Pop ’em, scope on the nigga, who shot ya?

For those who like the beat , here we have it ready for you. Listen Or download 6ix9ine – BILLY instrumental from here! Enjoy!!!.